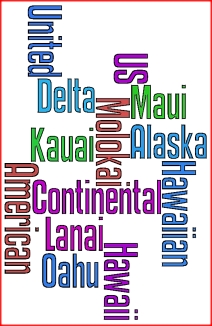 Speculation arose again this weekend about the possibility of Alaska Air being acquired by American Airlines.

Alaska, which has of recent become a very significant player here in Hawaii’s skies, is valued at $1.5B, which makes it small enough to still be easily digestible.

This news of course comes hot on the heels of the announcement that the long-awaited marriage of Continental and United will come to fruition.  I’ve believed for several years that once a second major consolidation occurred (following the Delta/Northwest merger), the pace of subsequent industry plays would quicken considerably.  That time has arrived.

Hawaiian is much smaller than Alaska, with a market value of just under $400M.

My thought is that Hawaiian, which has never denied interest in being acquired, may not remain independent much longer.  Here were my thoughts nearly a year and half ago:

“…Discussing Hawaiian’s Airbus order last summer, I remain skeptical about their ability to stay independent in the long term.  This is in no way a reflection of anything wrong at Hawaiian, it is merely the state of the airline industry.  I consider their future aircraft orders as a backup plan contingent on the larger question of company ownership.  While airline consolidation seems to be taking a breather for the moment following the Delta/Northwest deal, I hardly think we’ve heard the last on the subject.”

Hawaiian took delivery last week of their first Airbus A330, which will go into service on their Honolulu to Los Angles route next month.  It is the first of three leased A300’s joining their fleet this year. Hawaiian has also indicated interest in serving Asia and Europe.

I continue to wonder if that wasn’t a strategic blunder.  Alaska is nimbly using those smaller planes (737’s) to move into Hawaiian’s home turf, the Pacific Coast to Hawaii, with a vengeance.

Recently, for example, Alaska added a second Seattle-Kona flight that will operate from November through April, to supplement their year-round Seattle-Kona service.  That’s flexibility.

And, as a point of reference regarding fuel cost, Alaska’s 737’s are approximately one-third more fuel efficient than Hawaiian’s new A330’s.  That’s simply a huge difference.