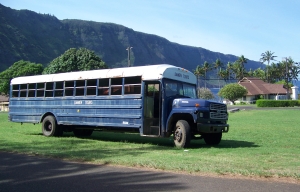 One of the most beautiful places in Hawaii is also the site of much hardship and enforced imprisonment. Those with Hansen’s Disease were called “lepers” and sent to live here, on Molokai’s Kalaupapa Peninsula, against their will.  They represented all ages, ethnicity and economic status.

For $50 I was taken on a tour of the settlement in an old school bus following my hike down the Pali Trail. It gave me a sense of what forced quarantine might be like. My freedom to explore on my own was taken away. Most buildings were off limits to me including the U.S. Post Office. I was truly an outsider.

There are currently 19 patients left and they are elderly. The rest of the 100 people who live here are employed by the Park Service and State of Hawaii.

What happens to Kalaupapa when the last patient dies is unclear. No longer under quarantine they choose to live here because this has always been their home.

The 4 hour tour begins in Kalaupapa which became the second settlement starting in 1890.

It was warmer and drier than the first settlement at Kalawao which began in 1866.  Kalawao is where Father Damien lived and worked. We were taken there for the last hour of the tour and to enjoy our lunch.

As I looked at the world’s highest sea cliffs to my right I gazed out to the surf and the two islands in the distance where the first ships dropped anchor. Patients were taken to shore in small boats to the beach below. Those who refused were pushed off the ship into the water and made to swim. 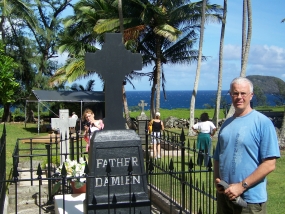 I tried to imagine their voices from back then and felt honored to walk in their footsteps and Saint Damien’s. We toured the church he built and visited his grave site before returning to the starting point of the tour. Father Damien’s remains were returned to Belgium in the 1930’s and the relic of his right hand is now buried here.

As I began the steep trail back topside, I left wanting to return and learn more.

Kalaupapa is a national historical park but entry is restricted.

Visitors Policy: You must be at least 16 years of age and be invited by a resident or have an advanced reservation with Damien Tours.

Damien Tour Reservations: Hikers must reserve in advance by calling (808) 567-6171 between 7am and 9am (HST). You can leave a detailed message if no one is around. Since tours fill quickly it’s best to reserve early. There are no tours on Sunday. The daily tour starts at 10:00 a.m.

If you opt for the mule ride or fly in on an organized tour, there is no additional fee or reservation needed for Damien Tours.

Cost: Hikers pay $50 per person on arrival by cash, personal check or traveler’s check. No credit cards accepted. Lunch is not included.

Our thanks to Hotel Molokai for providing accommodations.