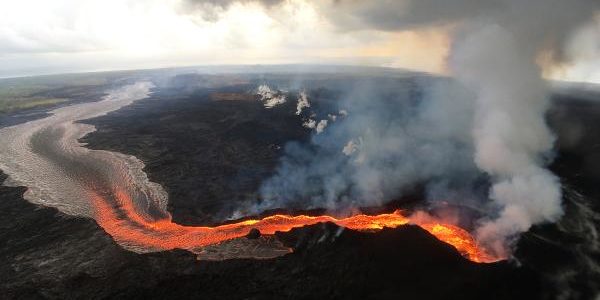 The latest crash involving Hawaii helicopter tours occurred near Puna on the Big Island Thursday. Thankfully everyone survived. A Blue Hawaiian Helicopters’ Eurocopter EC 130 was on a Circle of Fires tour out of Hilo and had five passengers on-board when it made a hard landing and rolled over near Volcanoes National Park. Passengers and the pilot suffered injuries and were taken to the hospital.

The FAA said that “the aircraft experienced engine problems.” The pilot apparently landed the craft following a warning indication. The FAA is investigating the incident.

Another Blue Hawaiian EC 130 went down on Molokai in 2011, killing the pilot and the four passengers. The NTSB blamed the pilot in that incident, stating the probable cause as “the pilot’s failure to maintain clearance from mountainous terrain while operating in marginal weather conditions… Contributing to the accident was the pilot’s decision to operate into an area surrounded by rising terrain, low and possibly descending cloud bases, rain showers and high wind.”

With this latest Puna crash, the recent Kauai crash, and the California crash involving Kobe Bryant, Hawaii helicopter tour safety returned to the forefront again. Hawaii has a disproportionately large percentage of US helicopter incidents.

Less than three months ago, on December 26, 2019, a Safari Helicopters’ aircraft crashed into a hillside on a Na Pali Coast tour during quick-changing low visibility. The helicopter was an ASTAR B2 aircraft with 1D1 Turbomeca engines. The only prior Hawaii helicopter incident involving Safari dates back to 1987, in which there were no fatalities. The helicopter carried the pilot plus two children and four adult passengers. The wreckage of the helicopter was later found in Kokee State Park near Nualolo. See the preliminary NTSB report.

Senator Ed Case said “The rapidly mounting loss of life and ground risks from Hawaii air tour helicopter/small aircraft crashes should be tragedy enough and spark unanimous concern for the basic safety of these operations…. Tour helicopter and small aircraft operations are not safe, and innocent lives are paying the price.”

In August 2019, Case introduced the Safe and Quiet Skies Act, designed to impose stricter regulations on commercial tour operations to including helicopters and small planes. In addition to strict sound regulations, it would require tour flights to fly no less than 1,500-foot altitude over actual ground at virtually all times. We were recently on a flight seeing tour in Africa wherein the pilot flew at a mere 200 feet above ground. Hmm.

Senator Mazie Hirono recently asked for more information about Hawaii helicopter tours from the NTSB and the FAA. She is seeking “an accounting of all air tour accidents and unintended landings in Hawaii for the last five years, the findings, recommendations and requirements.” State representative Cynthia Thielen wants federal authorities to stop Hawaii helicopter tours in residential areas and national parks, and had asked that flights be grounded until the April crash investigation is completed.

On April 29, 2019, a Novictor Tour Helicopter went down in a residential neighborhood at Kailua on Oahu. Three people were killed in that incident which is still under investigation, including the pilot. The NTSB preliminary report said that witnesses “observed the helicopter in a nose low attitude descending rapidly; none of the rotor blades were moving and the helicopter appeared to be descending vertically with little forward motion.”

The helicopter that crashed in Kailua was a four-seat Robinson R44. The popular and lower entry cost R44 helicopters appear to be flown by and are listed on the websites of the following Hawaii companies: Novictor, Mauna Loa, Pacific Helicopter Tours. There may be others. NTSB reports indicate that R44’s suffered 42 US crashes involving fatalities in the 10 years between 2006 and 2016. That deadly accident rate is roughly 50% higher than the other most common helicopters for civilian flights, according to an LA Times article from November.

Over 60 Hawaii Helicopter Tours Had Accidents In Past 40 Years

In Hawaii, weather conditions are extremely fast changing. That, put together with financial considerations necessitating flying, make the situation worse. Perhaps as many as one third of all helicopter accidents here are weather related.

In total this latest incident makes more than 60 total crashes in Hawaii, nearly 20 with fatalities, in the past 40 years. Over fifty passengers and 11 pilots have died. While each life lost is obviously very important, there are a huge number of visitors who have flown safely.

Rules have been in place for years that define minimum altitudes and clearances as well as other rules and safety equipment. Even so, the number of crashes that have resulted from low visibility in rain and clouds increased from 5 percent to 32 percent of all helicopter tour crashes.

There remains controversy regarding an FAA proposal establishing a minimum altitude of 1500 feet in order to avoid obscured mountain peaks that are frequently found in Hawaii. Tour operators believe that the increased altitude could result in additional crashes from reduced visibility in clouds often present at higher altitudes.

The Hawaii Helicopter Association is an organization whose goals include noise compliance (if you’ve ever hiked Waimea Canyon on Kauai, we need say no more). She said, “we wanted to get the operators together to do a number of things to promote responsible helicopter flying in Hawaii and advance new initiatives.” Included in the association’s plan is a state-wide aviation weather cam network.

Does these incidents impact your decision to take Hawaii helicopter tours?

We know that helicopter tours are a most popular Hawaii activity that many visitors enjoy safely.