Instagram can have some beautiful posts about Hawaii. The one we are speaking about, unfortunately, was not one of them. We were floored when we saw the first of these viral posts earlier today. One has since been deleted, although the furor from it has continued unabated in another post still live below at the time of publishing. We also grabbed a screenshot before the original one disappeared to share with you. Beware of foul language.

Alexis Lopez is not vaccinated, and thus complied with the Hawaii Safe Travels Covid testing protocol before traveling to Hawaii from his home in Las Vegas. As we understand, the test result was actually negative and he came to Hawaii from Las Vegas, perhaps to get married here, we aren’t sure. When he arrived, however, and got on Instagram, it all went wrong, terribly wrong.

He posted claiming that he in fact used someone else’s negative test result to come here and that he actually has Covid and traveled to Hawaii anyway. That was a ruse, and he used his own test and does not have Covid.

You can see some of what he had to say, and the comments that followed below: 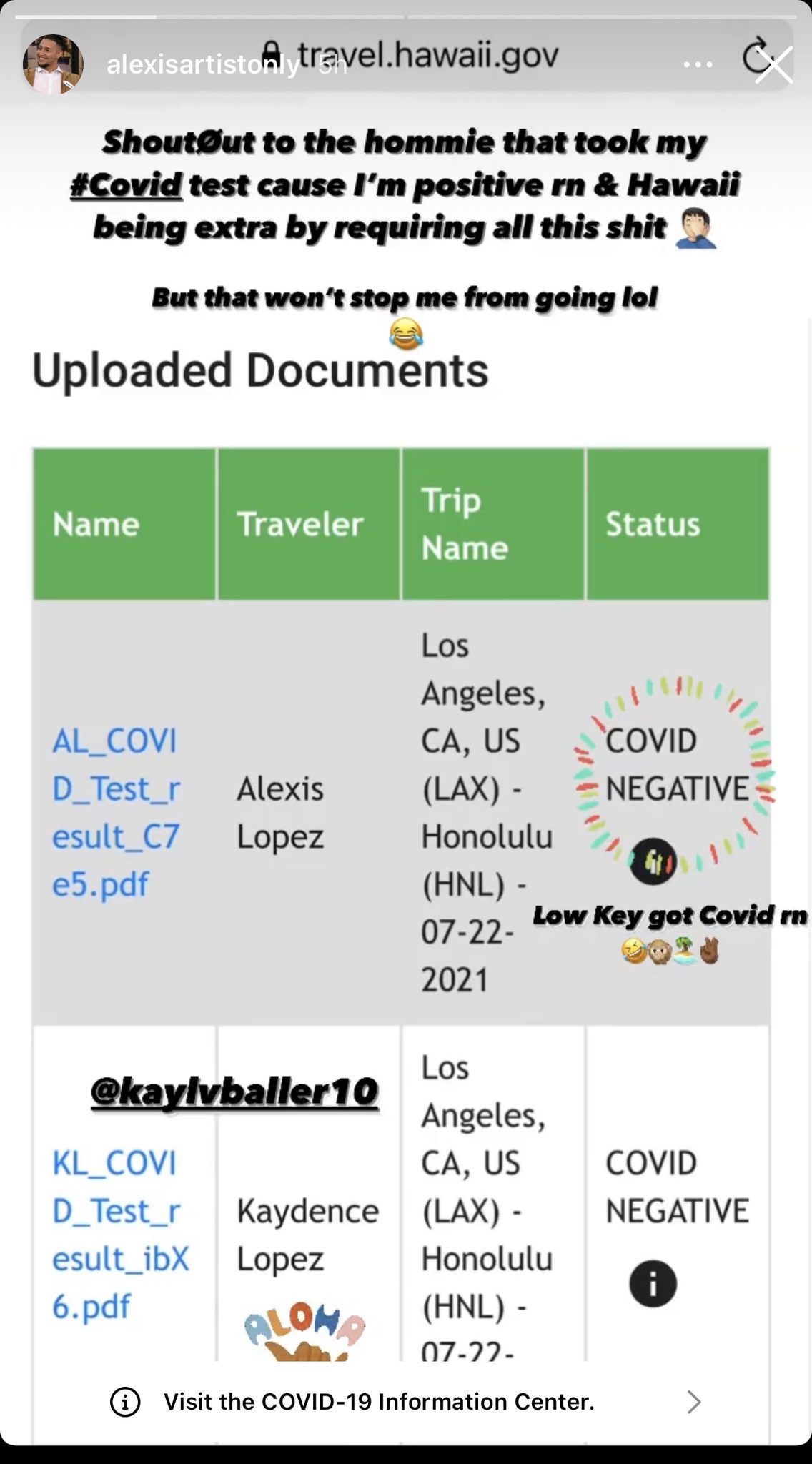 A post shared by Alexis Artist Only ENT. (@alexisartistonly)

One commenter said, “Hope you enjoy Hawai’i !! Hoping you get that ocean-view from behind bars.” Another said, “Oh buddy. You messed up. 🤦‍♂️” And lastly, someone came to his support, saying, “Dude says this was all an “inside joke” and that we “live in a free country and we can say (what) ever we want to.”

Alexis added that he didn’t know how his post had gone viral, that it was just to be shared with his cousin. He is quoted as saying, “If I offended anybody of course I apologize.”

As a result of his posts, Alexis has received hundreds of negative comments, angry messages about not being welcome, and threats that likely just ruined his entire vacation.

Governor Ige and Lt. Governor Green both got word of this too and were none too happy. Green said, “If people falsify a vaccine card, that’s a federal document, if people falsify their tests, it can be punishable by some pretty large fines and even some time in prison.” Green also mentioned that while, in the end, this appears to be a hoax, in fact, there have been recent cases of arrivals in Hawaii who had fake Covid documents.

The governor added, “I’ve seen posts recently about someone claiming to be coming to Hawaiʻi while sick with COVID and intentionally cheating the Safe Travels test. Please know that the right agencies are now investigating and will take appropriate action.”

We don’t even know what to say about this. So we’ll leave it up to you. Mahalo.