Japanese owned 7-Eleven recently announced plans to double its presence in Hawaii. They will add 46 stores to the existing 55 stores on Oahu, Maui, Kauai and the Big Island over the next five years.  The chain which first came to Hawaii over thirty years ago has 41,000 stores nationwide.

ABC has 78 stores, including 58 in Hawaii, all strategically located in tourist areas. There are a number of different style stores with everything from the basic Waikiki model and “Superette” with more groceries, to the gigantic Ala Moana shopping center location, and finally the Big Island Gourmet Market.

As cliche as they are, there’s always something to buy, for visitor or local alike. And you can frequently get some pretty good deals at ABC too. Personally, I like sandwiches, starting at $2.25, reasonably priced t-shirts and hats, baby clothes, bottled water (99 cents), and their hours (from early morning until very late at night). 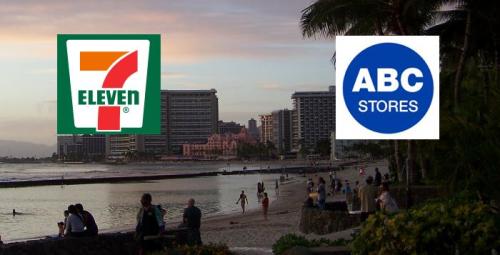 It all began in the 1930’s, when current owner Sidney Kosasa began working in his parents’ Honolulu grocery store. That was followed in 1949 by his opening of his own chain of Hawaii drug stores. Sidney imagined before most people, the tourism explosion that was soon to rock Hawaii, and Waikiki in particular.

The first ABC store, as we know it today, opened in Waikiki in 1964. He remains true to his vision today, and ABC stores is ranked among Hawaii’s top businesses, selling more macadamias, sunscreen and souvenirs than any other store in Hawaii.