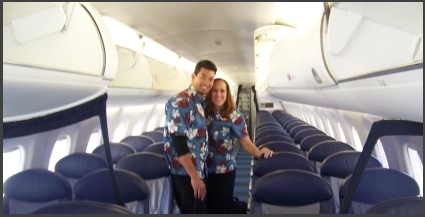 We’ve both been flying around Hawaii on Mokulele Airline’s Embraer 170 jet service again. That is a big change for these two guys who have been Hawaiian Air’s most frequent fliers for years.

Inter-island airfares are still cheap, so its a great time to see more than one island the next time you are in Hawaii.

Since we last wrote about our experience with Mokulele, four significant changes have occurred:

1. Mokulele has just signed a booking agreement with Expedia, so you can reserve flights there, either alone or in a package.

2.  Effective June 1, Mokulele has a new schedule which starts earlier in the morning and runs later in the evening.  For us, this means we can spend the day on another island and still get home at night.

3.  New jet service added between Honolulu and Hilo effective May 1.

4. Continental and Mokulele have a new interline ticketing agreement.

Have you flown Mokulele yet?  If so, let us know what you think about the new kid on the inter-island jet block.

(Photo was taken on our recent flight between Lihue and Honolulu.  )