There’s yet another player rumored to be reconsidering Hawaii inter-island service. Two years ago I first suggested that Alaska Air was interested in becoming involved in the Hawaii inter-island market.  And I believe that is even more true today. Alaska has since become the single most aggressive player in Hawaii’s skies today, opening more new Hawaii routes than any other airline.

At this moment there is an unprecedented jockeying for position in Hawaii air service occurring. It isn’t quite visible to the public yet, but it soon will be. It is being led by Alaska, which having arrived first, is going to try to lock in its dominance, prior to the upcoming arrival of Southwest and Allegiant. Southwest could arrive in Hawaii in just over one year, with its ETOPS 737-800’s deliveries to begin in March 2012. And Southwest may well be planning inter-island service.

Alaska’s Horizon Air unit has a fleet of 40 perfectly Hawaii-suited Bombardier Q-400 aircraft. With these, Alaska may make a pre-emptive entry into the inter-island market rather than wait to see what dominant Southwest plans to do.

Go! Mokulele coincidentally released their November and year to date traffic figures yesterday.  In a nutshell, it’s down another 15% for the year, with no sign of abating. I continue to see little reason for Republic’s Go! to continue inter-island service, other than that they just happen to have created a perfect balance for Hawaiian to be able to dominate and control the market thus far. 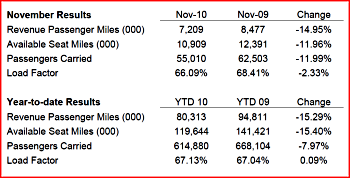 I can promise you this, we are about to see the most interesting time ever for Hawaii aviation. It will yield very favorable conditions for low priced airfares both inter-island and from the U.S. Mainland.