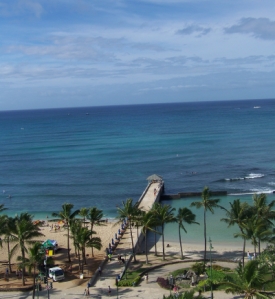 Thirteen year old Allegiant is a diminutive airline compared with mainline carriers.  Their might, however, is far greater than their size would indicate. Allegiant is one of the most profitable airlines, period.

Last year Allegiant reported net income of $76.3 million on revenue of $558 million.  Up to thirty percent of Allegiant sales are derived from non-airfare, composed mostly of packages that include hotel and/or car.

In comparison, Southwest Airlines reported net income of only $99 million on revenue of $10 billion.

Allegiant joins the Hawaii market later this year in a field dominated by regional airlines Alaska and Hawaiian Airlines, together with mainline carriers American, Continental, Delta, United and US Air.

These legacy airlines all play on a relatively even field comprised primarily of air only.  Each is of course working to improve their all-inclusive package performance, but they have accomplished little in that area compared with Allegiant.

Two Allegiant destinations are similar to Hawaii:  Florida and Las Vegas.  There, the carrier has amassed nearly 60 exclusive accommodation deals which are offered in conjunction with air.  Not coincidentally, those are the only two major airports Allegiant currently serves.  Otherwise, and another Allegiant focus and distinguishing point, is that the company only flies from smaller airports that do not often have competing services.

Allegiant has been on the ground here in Hawaii for over a year shopping for the best deals possible as they begin to put together packages.  I expect this to put intense pressure on their competitors because Allegiant will offer Hawaii visitors advantageous accommodation deals not otherwise available. In fact, Allegiant may well choose to sell Hawaii air only in conjunction with accommodations.

First, it is going to be awhile before this is sorted out, as all of the new planes will not be in service for 18 months.  When complete, the six 757’s will be used exclusively for Hawaii service.  Depending on utilization, that should afford them the ability to run perhaps 10 daily round trips to the islands.  As such, Allegiant will become a major player in Hawaii, and their presence and unique marketing abilities will be taken very seriously.

Hawaii airfares have been climbing higher recently, and deals have been fewer and farther between.  Because of the way that Allegiant packages accommodations, cars and other trip expenses with airfares, and based on their history, I believe Allegiant can offer better value in Hawaii deals than any competitor.  That will in turn raise the bar, which should result in improved overall value in Hawaii vacations across the board.